DOWNERS GROVE, Ill., July 12, 2021 /PRNewswire/ -- Elkay, the leading manufacturer of award-winning drinking water products, recently reached an incredible milestone - the production of the one millionth bottle filling station. Since its launch over ten years ago, the Elkay ezH2O® Bottle Fillers have saved more than 40 billion plastic bottles from ending up in landfills, enough to circle the Earth over 135 times. 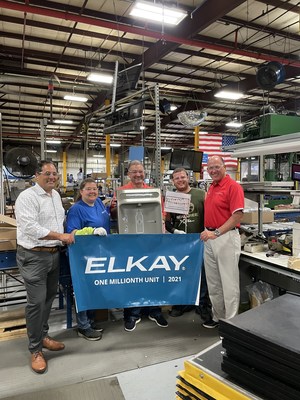 Leading the charge across the industry and upholding its commitment to delivering clean water and sustainable design, Elkay introduced the ezH2O® rapid bottle filling station in February of 2010 with the goal to reduce plastic waste. During its first year of launch, 4,000 units were sold, marking the beginning of its monumental bottle saving journey.

"We're so proud of this accomplishment and what we have been able to achieve with the ezH2O bottle filling stations over the last decade," said Ted Hamilton, President of Elkay Plumbing. "We set out to launch a first-of-its-kind bottle filling station with a sustainable design and we're excited to see where the next 10 years take us as we continue our mission in contributing to a cleaner environment and healthier communities for generations to come."

The one millionth ezH2O bottle filling station will be installed at Garfield Park in Elkay's hometown of Chicago. This installation will not only celebrate the production milestone, but is also part of marking the company's recent 100th year in business where Elkay partnered with the City of Chicago and nonprofit organization, Elevate, to install 100 units across the Chicagoland area. The installations will bring access to clean drinking water across locations that need it most, from schools to parks to youth centers and facilities.

Over the years, Elkay has continued to enhance the ezH2O bottle filling stations with features that matter most to those who use them, including a hands-free operation designed for hygiene and ease of use, NSF certified filters to help put cleaner, healthier water within reach by reducing lead and other contaminants, in addition to the LED filter status light, instilling trust in those consuming the water. One feature that sets this innovative product line apart is Elkay's exclusive Green Ticker™ which informs users the number of 20 oz. plastic water bottles saved from waste by using refillable bottles at the station encouraging a growing and sustainable habit among consumers globally.

Looking ahead, Elkay is committed to worldwide sustainability and working toward a greener future, including shipping a quarter million more ezH2Os by the end of 2021. To learn more about Elkay's bottle filling stations and sustainability efforts, please visit Elkay.com.

About Elkay
Family-owned since 1920, Elkay has been making innovative products and delivering exceptional customer care for almost a century. While proud to be America's No. 1 selling kitchen sink company, Elkay expanded its commercial offerings more than four decades ago, and today delivers faucets, water coolers, drinking fountains, Smartwell Water Delivery Systems, and the award-winning ezH2O bottle filling stations, in addition to world-class stainless steel and quartz sinks. Our Elkay Interior Systems business is a global leader in designing and building-out branded retail environments and commercial systems such as stainless steel products for commercial kitchens for leading international brands in the retail, hospitality, restaurant, and education markets. Like your family, Elkay has values and traditions that endure - like our commitment to sustainability and giving back to our community. Headquartered in the United States in Downers Grove, Illinois, Elkay employs over 2,400 employees worldwide, working from 28 locations across the U.S., China, and Mexico. For more information, visit www.elkay.com.